That's why we think. Voytegon broker is a scam that is not worth investing in

If we go to the official website of Voytegon - Voytegon.com, we will find that this company provides intermediary services for trading on the Forex market in England. In addition, Voytegon provides software for financial transactions.
Our specialists studied the Voytegon website, got acquainted with the terms of operations, made attempts to get at least demo access to the programs, studied the existence of official documents, the place of registration of the company.
With the help of the data obtained, we will find out: Voytegon - a divorce or not?
We will also explain to you how not to fall into the trap of scammers, about their methods of action. We will provide the necessary information in order to save your money safely.

The main sign that indicates that Voytegon.com is a scam is the state of residence. The organization is documented in the Marshall Islands, which is already doubtful, since it operates in the UK. Offshore states are popular with criminals due to the absence of the need to comply with the law and supervision.
In addition, this region does not have permissions for Forex activities.
Also, when our experts tried to reveal the address, data about the owners and directors of Voytegon, they failed to find anything.
This already hints that Voytegon.com is a fake online broker, interaction with which will result in large financial losses.

Having examined the site, we could not find truthful data about the directors of Voytegon.com. No addresses, no phone numbers or other means of communication.
We think that this means that the acting directors are trying to hide their identities in order to evade accountability for their crimes. If you manage to expose one of the Voytegon employees, then everything will end there, and the actual directors of the criminal firm will remain at large.

The website Voytegon.com talks about the serious experience of Forex operations.
The most common method of checking the official site is to obtain information about its domain. Most often, they indicate the age of the domain, the contact information of its owner.
In this case, the Voytegon.com domain exists for less than thirty days, and the data about the legal entity that owns it is classified. Another proof that the director of Voytegon is trying to keep incognito.
Such a desire can be understood, but not in those cases when it comes to a financial institution acting as an intermediary between a client and Forex.
At the same time, Voytegon.com themselves assure potential users that they have been successfully trading in the Forex market for many years. 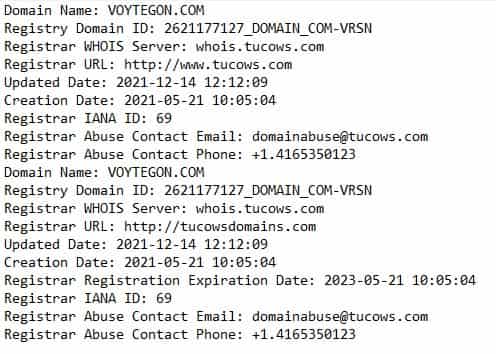 Voytegon does not have a demo period

It is a common practice for Internet brokers to give clients a test version of their services so that they get acquainted with the interface, try their hand at Forex trading with fake currencies.
Unfortunately, on the website Voytegon.com, we did not find information about the trial period, the ability to test the software.
Perhaps the owners of Voytegon simply do not plan to provide traders with demo access to the software, as some of them may begin to suspect a scam.

Official firms that operate in the Forex financial market do not use a negative account in their activities. In accordance with the laws, the client of an Internet broker cannot spend more than what is currently on his account. In rare cases, when the account still goes into negative territory, the loan must be repaid not by the trader, but by the organization that offered its services.
Because of this, honest brokers do not use a negative balance in their activities.
However, Voytegon gives users work with a negative score, that is, in debt.
Why is this needed?
In order to drive the user into debt and start extorting to pay off the debt. This is one of the most common methods of fraud used by financial scammers.
If this has already happened, you need to know that the deceivers do not have the opportunity to recover money under the laws of Great Britain. Absolutely all methods of influencing customers are considered illegal. The most that criminals are able to do is call, send threatening letters.
You cannot work with Voytegon, since all agreements will turn out to be losses.

Voytegon.com operate with a credit ratio of one to four hundred or more

Already, it becomes clear that Voytegon are swindlers. And yet, let's point out one more nuance, namely the presence of too large a credit ratio.
Leverage is the ratio of money between traders and brokers when making a deal. Leverage allows significant trades to be made by users who do not have access to a lot of money.
In order to protect users of the Forex financial market, in civilized countries, the current legislation requires the use of a credit ratio with the highest ratio of 1 to 30, sometimes 50.
At the same time, Voytegon uses a credit leverage of 1 to four hundred to make money on the Forex market.
Such an attitude is allowed in Switzerland, since firms registered in this state enjoy great confidence. However, Voytegon is not registered in this state.
In fact, Voytegon cannot operate in the Forex market with such a credit ratio, due to the high risk to users. So, this is used solely to force the client to transfer as much funds as possible, but also to drive him into debt.

It is considered solid for a company to have local divisions in civilized countries, even if the activity takes place only in the territory of Great Britain. Therefore, Voytegon says that in addition to a significant number of awards, there are regional offices in Britain, Australia and other civilized countries, and in addition about thousands of experienced professionals.
Checking the existence of these subdivisions is quite simple. Since there are industry structures that regulate the activities of online brokers. In the UK it's FCA, in Australia it's ASIC.
Therefore, a law-abiding firm must have permits from these or other organizations that will confirm their right to provide trading services on the Forex financial market, indicate the level of responsibility.
However, having studied specialized official sites, our experts could not find them. This once again confirms our fears.

For registration on Voytegon.com, you must transfer personal data

As we said earlier, Voytegon does not have a demo period and because of this, in order to gain access, you must immediately transfer the minimum deposit to Voytegon criminals. In addition, it is possible to get access to the Voytegon.com personal account only upon completion of the client confirmation.
This means that Voytegon requires users to provide information such as:

In addition, with the first payment, the bandits can access bank account information.
As a result, this information may allow fraudsters to issue a loan to a gullible user, or to carry out other shady activities.
Since you need to transfer personal data to register on the Voytegon.com website, our specialists did not get access to the Voytegon personal account or applications for trading in the Forex financial market.

A very important step in exposing Voytegon is the analysis of user reviews.
Analysis of the results in search engines allowed us to obtain the following information:

Because of this, real reviews of Voytegon report that this online broker is a scam.

After analyzing the data on Voytegon.com, we found a lot of dubious digital documents that can be easily done with a graphics editor. They are not confirmed by official firms, which means they cannot be trusted.
If an Internet broker is not associated with regulatory organizations, then traders simply have nowhere to turn for help.
On the "Contacts" page, our experts found a phone number. It turned out that it had already been used by an illegal online broker. There are also many reviews on the web about fraudulent activities associated with the phone number listed on Voytegon.com.

Are you going to make money with the help of a Forex broker? Make sure that you can take away investments from him.
Analyzing the user agreement on the Voytegon website, our experts did not find clear information about the withdrawal methods. In addition, we saw a description of the punishments for a long period of inactivity of the account, while we did not find data on the sizes. Since criminals do not operate in the legal field, it will not be possible to cancel these requisitions.
Because of this, even if a trader has finished working with Voytegon, they may be disturbed by calls and spammed with a demand to pay a fine.

The user search method used by Voytegon also raises concerns.
For advertising, false social media profiles are used, in which fake bloggers spread information about how they instantly managed to get rich by trading on the Forex financial market using Voytegon. Fakes show expensive cars and clothes, resorts and other indicators of a prosperous life.
They promise instant earnings, for which you do not need to study or make efforts.
If a potential user gets in touch with scammers, Voytegon employees talk about the reality of making quick money, and also about the unique abilities of their programs, which will allow you to quickly get serious income.
Then all sorts of tricks are used to get as much investment from the client as possible. For example, you can draw a fake profit to motivate you to transfer even more money.
If the work on the Forex financial market is unprofitable, the manager will offer to transfer more to cover the losses.
Voytegon employees work according to guidelines developed by professional scammers. Criminals analyze information about the client in order to act on specific places, to lure out even more money.
As a result, all this will come to one of two options:

Another way to generate income for Voytegon can be to transfer your personal information to interested organizations. Most likely, after that, information about you can be bought for a modest amount on an anonymous community on the dark web.
Most likely, because of this, all kinds of scammers, managers, etc. will call you more often. In addition, it is worth waiting for letters from Voytegon.com colleagues who will begin to offer to “receive” the lost money, of course, for payment.
Since Voytegon does not operate in an official field and remains incognito, they cannot be forced to answer under the law in Britain. The bosses of the shadow firm are skillfully disguised and, at best, the legitimate authorities will be able to catch one of the "employees".

In no case!
Only if you are going to give finances to scammers, then it is better to give them to a good cause.
Let's briefly state the facts that Voytegon are scammers:

Detailed review of Voytegon - completed. It is clear that Voytegon are criminals.