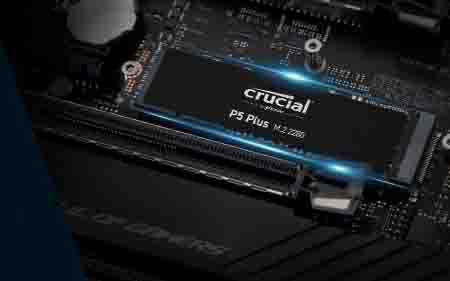 Distribution of the new version of the PCIe standard has already begun and the first models have become available on the market. Some companies have created new lines for updated drives, some have included them in existing ones. So it happened with the Crucial P5, which, with the update of the connection interface, received the addition of "Plus" in the title.

Crucial P5 Plus SSDs are the new flagship models from Micron. Unlike the P5 line, there is no 250 GB variant in the new line. Only 500, 1000 and 2000 GB drives are available on the market. All of them are equipped with DRAM cache and use the latest 176-layer TLC NAND memory in addition to the mentioned controller with PCIe 4 support.

All chips are on the same side of the PCB. They are covered with a sticker with the logo and model name. The sticker on the back shows the firmware version and the PSID for resetting the SSD hardware encryption password.

No heatsinks or thermal interfaces are provided. As expected, there may be a problem of overheating under heavy load, due to which the drives can throttling. However, it is worth noting that many motherboards have heatsinks for M.2 drives, which will help level this nuance.

It, in turn, works on 8 channels with the new memory with 176 layers from Micron itself, which is currently one of the fastest in the industry. It uses a fundamentally new "replacement-gate" technology with a metal, rather than a semiconductor control gate. This not only allowed 3D NAND chips to be made more compact, but also significantly increased their performance characteristics, and also provided higher reliability. The declared speed indicators are 6600 MB / s for reading and 5000 MB / s for writing.

Let us briefly recall that each new generation of PCIe has 2 times the bandwidth compared to the previous one. The PCIe 3.0 standard provided data transfer rates of 4 GB/s, while PCIe 4.0 reached 8 GB/s for four lanes. The first motherboards with the new interface came out in late 2018 - early 2019. So far, they have not received wide distribution, especially since, along with the new connection bus, manufacturers have begun to integrate the fifth generation of RAM, which received double the bandwidth and volume compared to DDR4.

All these innovations are complemented by LPDDR4 DRAM cache. For the 500 and 1000 GB SSD versions, the cache is 1 GB. And for the 2 TB version, as in our case - 2 GB. These are expected figures, which, in the case of the 2 TB version, made it possible to write large amounts of data at maximum speed for about two minutes. Then the speed is reduced to 1100-1300 MB / s. It is worth noting that an SSD of this size will allow it to be used as an installation for games and content editors. With them, data packets will be scattered and the user will most likely not have to deal with filling the cache.

The TBW (Total Byte Written) parameter declared by the manufacturer for three available capacities - 300, 600 and 1200 TB. MTBF is 2 million hours. The manufacturer's warranty is 5 years.

The new Crucial P5 Plus has become a natural evolution in the development of the solid state drive segment. He received a variety of volumes enough to solve various problems of users. From a purely fast drive for the operating system to large and fast storage for the OS, games and demanding software packages. All in all, the Crucial P5 Plus is a great choice for applications.

Speed ??was, of course, the main innovation of the new PCIe 4.0 SSDs. Demanding games will have room to download data. The work of background processes with content, somehow buffering, will reach a new level. A large volume will allow you to store all the necessary software on a single drive. You can not worry about its safety if you use the Storage Executive software and free cloning software that come with the kit.

In light of today's vicissitudes in the semiconductor market and computer components in general, switching to a drive with a new interface will allow you to maximize the system if it still uses the third generation. And with the transition to a new platform, get an almost two-fold increase in the speed of data exchange. The release of new standards and protocols is inevitable. We hope that the release of components with new versions of the standards will not be long in coming.